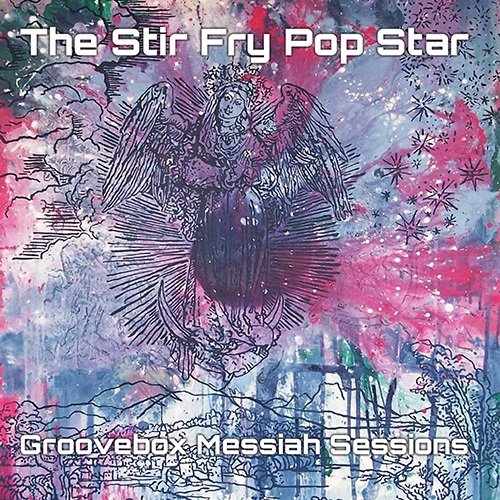 The Stir Fry Pop Star is the alter ego of Ryan Wilson, hailing from Croydon in south London.
Unusually, his musical interests were sparked by a childhood fascination of science fiction movies and TV programmes. This developed into an interest in sound effects and music scores, created by the BBC’s symphonic workshop and KPM library catalogues. His burgeoning interests steadily progressed into an obsession with synthesisers, drum machines and sequencers. After acquiring a few of these said instruments throughout his teenage years and twenties, he then tried his hand playing for a plethora of indie bands with limited success. Nursing his musical wings, he decided to return to his favourite original influences, in particular, music from the era of 1980 to “82” and the early nineties. Fusing these styles together with a markedly pop orientated direction, he set out to make music that both moved hearts, souls and fancy feet.

The Stir Fry Pop Star’s Groovebox Messiah Sessions was written on a cheap second- hand Roland MC303 keyboard. Wilson stated the reason for choosing such an instrument, was to go back to basics and concentrate on simple song structures. However, he realised he needed additional production and detail within the music. He then recorded and mixed the rest of the album in a converted garage-studio in south London. Hiring a producer, Gary Meek (ex D-Ream) and a few session musicians along the way: such as Tim Dorney (Republica / Flowered Up) and Peter Steer (Tenek) to name a few. The process of completing the album, along with coping with a full-time job and young family, took over three and a half years. Wilson then gave the completed album to Stuart Hawkes (Disclosure, Rudimental, Lorde, Nero, Example) for mastering and sonic stardust at Metropolis studios.

Lyrically each song on the album reflects a personal and intimate aesthetic of emotions: exploring the pains and delights of relationships, existential angst, fleeting youth and a simmering dissatisfaction of modernity. Musically each song packs a cool left-field punch of pure pop sensibility. Influences ranging over Wilson’s musical heritage, taking in eighties electro, early nineties dark industrial EBM to spaced-out rave and trance like psychedelia. The collage of influences and traditional aspects of each song becomes much more the some of the Messiah Sessions musical parts. Within each track there is a refreshing capacity for change. Disparate influences fuse together into confident melodies, showing a versatilely that is often steered away from in today’s current dance and alternative-indie synthpop scene.
In songs like Soul Riser and Fears and Tears, Wilson’s distinctive vocal lines take different directions whilst the songs progress within a classic pop formula. It’s this unexpected approach which pushes the Messiah Sessions way outside of anything you could expect from this genre of music. The range of electro, synthpop and alternative indie styles, gives it a contemporary direction in melody and danced based production prevalent not only to the present but also the past. Wilson’s song writing style maybe steeped in classic pop structures, but by keeping it simple, his musical reach goes further and wider, whilst avoiding retrospective pastiche and musical clichés. This is a debut album of considerable high consistency, from an artist who appears to have arrived hitting the ground running.
Currently Mr Stir Fry has had lots of positive air-play from BBC Introducing (London), Synth City – Phoenix 98 FM, Eagle 3, Rusty Egans Electronic Family Tree on Artefaktor Radio and Analogue Trash Radio as well as various niche internet radio stations across the globe.