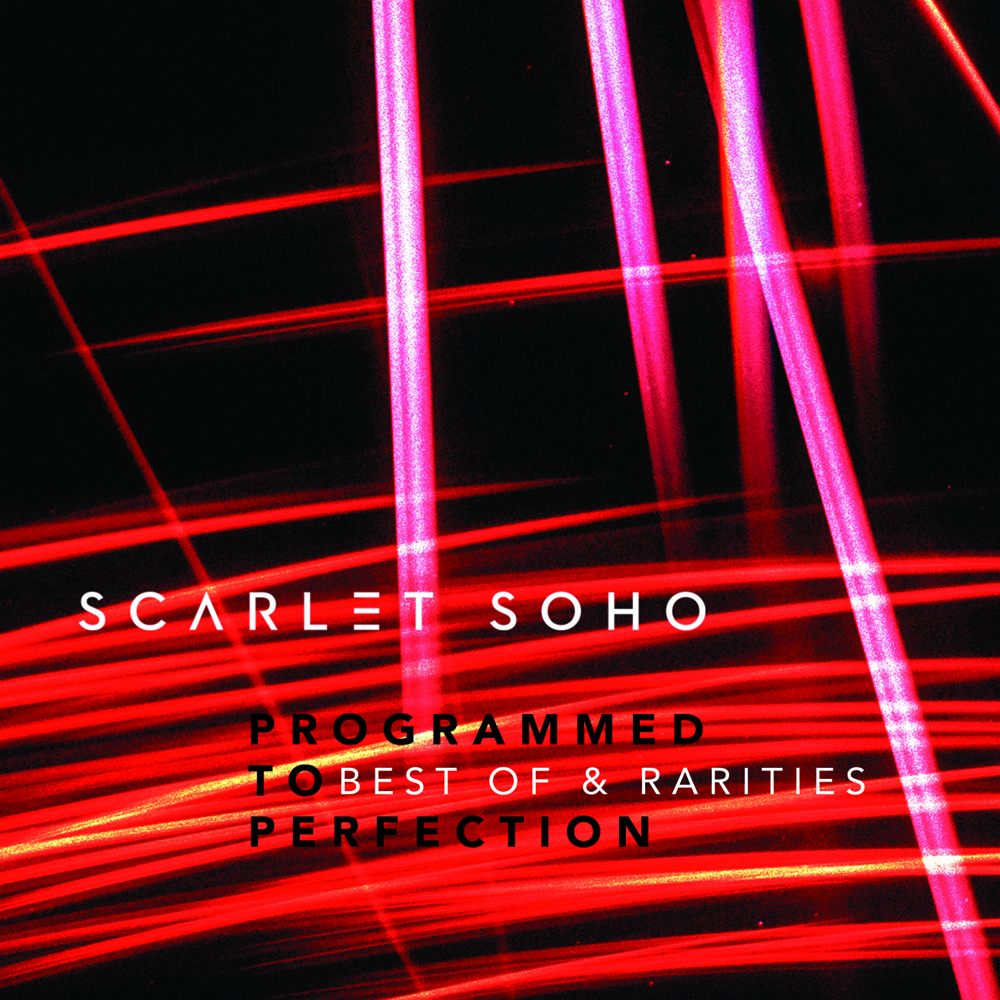 CD 1
1.Modern Radio
2.Skin Trade
3.Programmed To Perfection
4.Disconnected
5.I Dare
6.Analogue Dialogue (Kill The Beat)
7.Cyclone
8.Speak Your Mind
9.Is Growing Up The Best That We Can Do?
10.Lights Out London
11.In Cold Blood
12.When The Lights Go Out
13.What You Need
14.Gigolo
15.Solo KO
16.Into The Night ft Isgaard & Loic Rathscheck
17.Children Of The Sun ft Loic Rathscheck

Scarlet Soho are back with this powerful 31 track double album. Celebrating 20 years making music together.
With an 8 page colour pullout which includes previously unseen band fotos, this is a must for any synthpop collectors.
It includes the best of their three studio albums, along with b-sides, demos, and remixes from !distain, James Yuill and Teenage Mutants.

It may not be such an unusual sight now, with many acts happily straddling the worlds of pop and indie, but when I first met Scarlet Soho, no one else was doing what they were doing. At a time when going to a gig always meant watching three near identical guitar bands, Scarlet Soho shunned that tired idea of what a band should be, got in a van with some synths and a drum machine and played pop music to those same audiences.

It’s hard to describe now the range of responses they received. There was a time when you could guarantee that at least one person in the audience every night would shout, “Where’s your drummer?” Like the band hadn’t noticed they were a man down. It didn’t matter that Scarlet’s fuzzed-up bass lines provided sharp grooves to counter those clinical drums, or that James’ warm, souring vocals shot over expansive guitars. Or even that the songs these parts went together to make up were always smarter, catchier and simply better than any of the tired sounds their contemporaries were making. Some people just weren’t ready for the step forward Scarlet Soho were making.

But plenty were, and the band built up a solid network of fans around the country, desperate for something different.

Influenced as much by Faith No More as they are by The Human League and Depeche Mode, Scarlet Soho have always known how to mash genres to create perfect pop. And, like those bands, they stamp their own clear sound and personality on everything they do.

The band released their debut album, Divisions Of Decency, through UK indie label Human Recordings in 2004, bringing them to the attention of bands including Razorlight, Delays and IAMX, all of whom personally requested for Scarlet Soho to join them on tours. The dates took them around the UK and Europe, with gigs supporting IAMX at a sold out show at London’s legendary Scala venue, and headlining the very first MySpace Live event in Berlin.

In 2008, they signed to Hamburg-based label Major Records, home to IAMX and Ladytron, who released the second Scarlet Soho album, Warpaint, in 2009. A clear progression from their debut, the band were more comfortable and confident in their sound and their songwriting, evident in tracks such as Analogue Dialogue (Kill The Beat) and the epic This Nausea.

Further time on the road ensued, with their own headline European tour followed by UK dates with 80s legends A Flock Of Seagulls, and a Europe-wide outing with Zoot Woman playing to crowds of around 1000 people a night.

A third album was now on the cards, and two limited edition EPs – When The Lights Go Out and Solo KO – saw the band return to Europe with Kosheen and O Children, plus make their first appearance at WGT Leipzig in 2013.

In 2015 the band released their last studio album In Cold Blood. Thought of by many as their best work to date, this album included the singles When The Lights Go Out, Solo KO, and Two Steps From Heartache and was produced by the band themselves, with the mixing undertaken by Graham Laybourne and James Yuill.